Young people give many different reasons for smoking. Some say smoking makes them “feel mature and like an adult” or that they want “To fit in with a group socially” or “To try to control body weight.” Girls today smoke more than boys. Many attribute this to girls’ growing obsession with staying slim (as nicotine is a potent appetite suppressant) and cigarette ads’ portrayal of girls who smoke as sexy.   Girls who smoke regularly are more likely to have parents, siblings, or friends who smoke, be risk-takers and rebellious, and be limited in their educational goals.

Tobacco use is the single most preventable cause of death in the United States.  It also is a common cause of heart disease, cancers, and strokes. Adolescents can become hooked on cigarettes after smoking only a few packs and once addicted, they find it extremely hard to quit. One national study asked young tobacco users if they thought they would be smoking in five years. Those who replied “no”were contacted five years later and three in four were still addicted.

Kids who use tobacco have more physical complaints than their peers who do not smoke. Smokers also cough and have asthma attacks and respiratory problems more often, leading to more sick days, more doctor bills, and poorer athletic performance. These children are more likely to use alcohol and other drugs such as cocaine and marijuana. According to the Centers for Disease Control and Prevention, adolescents who smoke are three times more likely to drink alcohol, eight times more likely to smoke marijuana and twenty-two times more likely to use cocaine. For that reason, tobacco has been dubbed a “gateway” drug.

Parents play an integral part in helping keep their kids Tobacco Free. The tips below can help you in this regard (1). 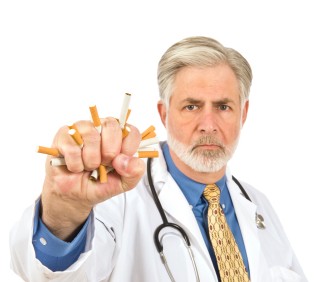 Take a Stand at Home Early and Often

Teach your children about the myths of tobacco. This video discusses the 7 myths that are commonly associated with smoking. Then discuss the issues with your teen when you feel it is appropriate.

For age specific advice, on how to discuss tobacco use with your kids, refer to:

Tips to Talking to your kids about smoking

If you or your child is already addicted, there’s help available to you. You and/or your child can successfully quit smoking with help and support. Get support from family and friends. Ask your doctor for help finding a program to stop smoking.or call 1-800-QUIT-NOW (800/784-8669). 1-800-QUIT NOW is a national toll-free telephone counseling resource.  Additional resources can be found at: http://teen.smokefree.gov.